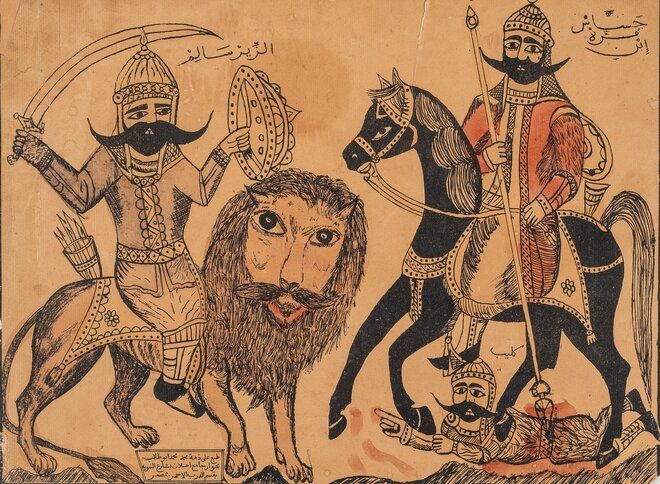 On March 6th the State Museum of Oriental Art opens the exhibition “Prophets and Heroes. Arab folk painting of the XIX-XX centuries”.

The exposition will acquaint viewers with unique examples of Arab folk paintings of the 19th – 20th centuries. Printed images of the Quranic prophets, sheikhs and “saints”, as well as heroes of early Islamic history and Arabic epic legends were placed in public places and private houses (they would be hanged indoors on important holidays like weddings, births of the children etc). Those pictures would also be used in the shops in order to attract buyers and increase profits. In the first half of the 20th century portraits of national heroes are being featured more and more in these kind of paintings (popular prints) due to the national liberation movement at that time. By the 1960s, the production of these popular prints almost completely disappeared.

Exhibition will feature about 30 folk paintings (popular prints). Most of them were printed in Egypt at the beginning of the XX century. Five works were published in Algeria, and three manuscript paintings of the 1930s - on the territory of modern Iraq (images of Shiite shrines in Karbala)

These unique exhibits come from the collections of the prominent Russian orientalist Yuri Zavadovsky and renowned Russian artist Ivan Bilibin. Zavadovsky’s collection have been preserved by the State Museum of Oriental Art and The Solzhenitsyn House of Russia Abroad, and Bilibin’s collection – at the Ivangorod Museum.

The main idea of the exhibition has two goals. The first is to pay homage to Yuri Zavadovsky, an outstanding scientist who contributed a lot to the Arabic studies in Russia. And second, to open a new page in the study of Arabic folk art in Russia, as there have been a formed opinion that Arabic art did not form its own visual tradition, developing primarily in the field of architecture, calligraphy, decorative and applied art. Folk Arabian picture still has not attracted the attention of researchers, either domestic or foreign.

Exhibition not only introduces new art objects from domestic collections into scientific circulation, it also for the first time attract  the attention of researchers on the visual tradition of the Arabic world.

The exhibition is dedicated to the cross Year of Culture Russia - Egypt 2020.