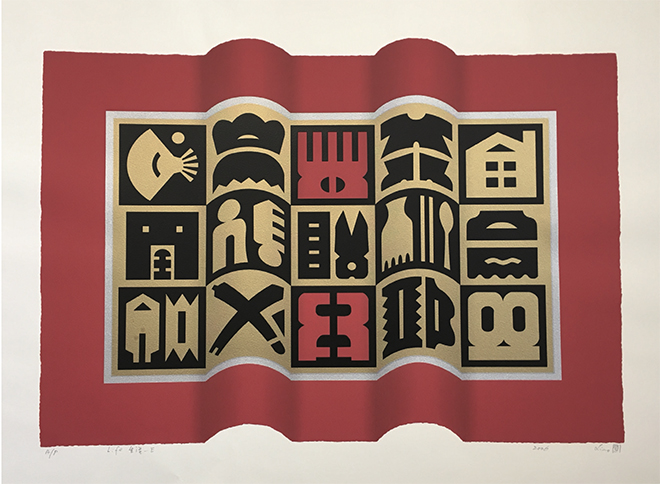 The State Museum of Oriental Art presents a new exhibition "Three generations of Taiwanese graphic artists". The exhibition will feature more than 30 works, made in various techniques of printed graphics by 18 contemporary Taiwanese artists.

The State Museum of Oriental Art presents a new exhibition "Three generations of Taiwanese graphic artists". The exhibition will feature more than 30 works, made in various techniques of printed graphics by 18 contemporary Taiwanese artists.

Liao Shuping represents and leads the so-called "first generation" of Taiwan's graphic artists. He was born in 1936 in Taipei (Taiwan), graduated from the Fine Arts Faculty of the National Taiwan Pedagogical University, then continued his studies in Japan and France. Liao Shuping applies modern printing techniques and combines them with national cultural traditions, drawing inspiration from the scenes, which he remembered since he was a child (celebrations at the Longshan Temple, the crowded Wanhua market, etc.). Liao Shuping has won many international awards and founded his own workshop. He actively promotes the art of engraving. He also is widely regarded as a "father of modern printed graphics in Taiwan".

The next, "second" generation is represented by the artists who are working with woodcuts, typical for the Far Eastern art, and with modern techniques (e.g. monotype and relief printing) as well. Pan Mengyao (b. 1965) stands out for his abstract works. Trying to surpass the technical capabilities of woodcut, the artist applies a combination of different printing methods, bright spots of colour, texture and incoherent scratching lines to create the graffiti-like works, which should convey the pressure of modern society on a person. The problem of anti-urbanism and the loss of communication between man and nature is raised in the works of the spouses Pan Chinju (b.1969) and Lai Maihuei (b. 1968). The black-and-white works of Chen Huachun (b.1967) tell the story of a search for love and show the struggle of a man between innermost desires and social norms. Traditional benevolent motifs, used in folk paintings, are played out in vivid works of Huang Chunyuan (b.1977).

Among the works of artists of the "third" generation you can find fantastic landscapes by Chang Tingya (b. 1983) with images from everyday life, mixed with illusions of reality in the worlds of Su Yutin (b. 1984), photo engravings by Li Zhiyun (b. 1993), etc.